Well, I guess our Sharp-shinned Hawk has settled down to live in the big palm tree across the way. We hear him several times a day as he circles the area overhead. Today he flew over holding something in his claws. It looked like it could have been a lizard or something.

The two crows are hanging out in our front tree. I'm also seeing more hummingbirds. They seem skittish though, I guess because they're just now coming back from wintering somewhere else. My little gray squirrel friend sat and ate at his feeder for about an hour this morning. He only ate the sunflower seeds and didn't touch the bread I just put out. 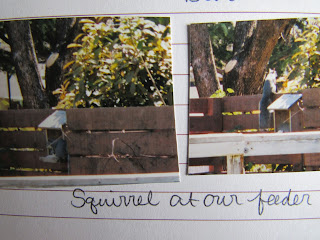 I'm excited about spring because there is so much going on in the yard now! I can't believe it's almost April already!!
Posted by Rachelle Vaughn at 1:56 PM No comments:

I'm sitting on the patio and it is a bird frenzy out here! Everyone is chirping and enjoying the beautiful weather. Somehow I've attracted these HUGE gigantic crows. There are two of them caw-ing in the trees and occasionally swooping down for some bread crumbs. After lunch, I put out some leftover potato sticks and one of them picked one up and took it up to the plum tree and ate half of it. Then he flew away with the rest. He seemed to really enjoy it!

There are tons of bees swarming around the cherry tree blossoms. I also saw my first hummingbird since winter today. I managed to get a picture of it. It had a green crown and was probably a Ruby-throated.

The song sparrows and mockingbirds are also out today. I also saw a black butterfly with yellow spots. It'll be interesting to see if my pictures turn out!
Posted by Rachelle Vaughn at 1:49 PM No comments:

Wow--it's just been a great time for seeing new birds lately! Over at a friend's house I saw a Western Meadowlark. We don't have them in our own yard, but there were quite a few where we were visiting. They have a great song and are bright yellow on their chest.

I wish I could attract some to our yard!
Posted by Rachelle Vaughn at 1:46 PM No comments:

Our First Visit to "The Bird Place" 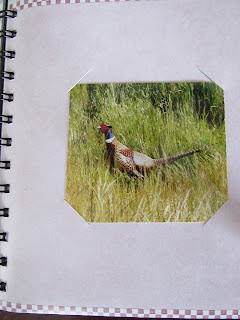 Wow!! Today we drove out to the Sacramento Wildlife Refuge. It only took about an hour and it was one of the nicest days I've had in a while! We saw so many different types of birds and ducks. Most of the park is wetlands and marshes. All over the place are these American Coots. They look like all-black ducks with white bills. We saw three types of cranes. Brown speckledy which could have been Sandhill Cranes or American Bitterns. The gorgeous white crane with big orange feet is actually the Snowy Egret. I also saw a black crane which turned out to be a Double-crested Cormorant. We saw several kinds of ducks. Male and female Mallard ducks, Northern Shovelers which look like male mallards but a little different. And Cinnamon Teals that had rust-colored bodies and maroon heads. There was also a giant flock of white Ross's Geese.

We saw some Red-winged Blackbirds which are very common, but I've never seen one before. We saw and heard lots of Ring-necked Pheasants, both male and female. Huge sea gulls were flying overhead, but it was difficult to identify which specific type they were. There were lots of sandpipers in the marshes. Some were all brown, some had white or black wings with white bodies.

The neatest thing we saw would have to be the Red-tailed Hawk. He was beautiful. He was snowy white with rust spots, light tan with a white chin. He sat in the tree and almost looked like a statue. 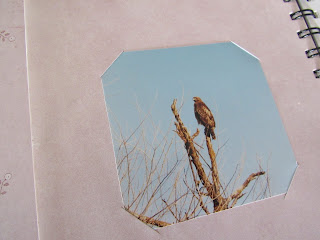 We got some really great pictures with our new zoom lens camera. We also saw Marsh Wrens, Beechy Ground Squirrels, Black-tailed Jackrabbits, two Black-tailed deer together and then later saw one running through water. 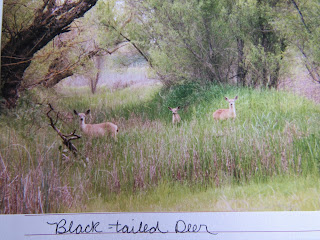 It was so beautiful out there. With the walking trails and auto tour, we saw so many different things. The sounds of all the birds was incredible, too. We will definitely go back to experience the different seasons when there are different species there :)
Posted by Rachelle Vaughn at 1:24 PM No comments:

Wow! It's amazing how many different birds we keep seeing in our backyard!! Today I looked out the window and saw a pair of California Quail!! They were incredibly gorgeous and much move vivid than the picture in the book. They were really pretty and the pom-poms (plume) on their heads were so cool.

For a few weeks now, we've been hearing this cry that sounds like some kind of hawk. Well, we finally saw it through the binoculars and it looks like a Sharp-shinned Hawk. It was in the big tree in the front corner, then we saw it in the palm tree across the street. It was really rust-colored on the body and had white spots on the edge of the wings. It doesn't really look like one in the picture, but the cry it makes matched the one on the computer program we have. That sound was what really gave it away.

The field guide says they prey on small birds at feeders. Oops!!
Posted by Rachelle Vaughn at 1:14 PM No comments:

Email ThisBlogThis!Share to TwitterShare to FacebookShare to Pinterest
Labels: Sharp-shinned Hawk
Newer Posts Older Posts Home
Subscribe to: Posts (Atom)
*All of my photos were taken before the coronavirus outbreak. I am now staying home and postponing my outdoor birding adventures to help prevent the spread/exposure of COVID-19.
Please be responsible and practice social distancing at all times and stay home whenever possible.