The "Bird Place" on the Coast

We went to the coast today! It was 110 degrees here yesterday and we couldn't stand it anymore. It was foggy when we first arrived in the morning and then it started to clear up in the afternoon. It was beautiful! We went to the Humboldt Bay National Wildlife Refuge. At the beginning of the trail we saw a deer not too far from us, drinking from the stream. We saw quite a few new species of birds, but they're very difficult to identify. Besides all the different variations, the pictures in the book don't match up to what we saw.

There were a lot of little birds flying around that looked like swifts, but I think they were some type of Tree Swallow. I'm not sure though. They had bluish wings on top and rust and white on the stomach.

We saw a Marbled Godwit. It was pretty big, specklety brown with long legs and bill. There were little sandpiper-like birds that were either Semipalmated Plovers or Killdeer. They were brown on top and white on the bottom half.

In the office, before we went on the trail, they said a Green Heron had been spotted and later on we saw one fly off in front of us. We also saw a Long-billed Curlew. It was rust-colored, long black legs and a long bill that curved down. A mom duck had four or five babies swimming in the creek.

The last thing we saw at the refuge was a weird looking duck. It kept diving down into the water. It had a white stripe by its eye and had sort of spiky feathers on its head. The closest I can find to it is the Pied-billed Grebe.

Later, by the ocean, we saw several different flocks of seagulls. There were about four different species, but I only found one in the book. It was a Ring-billed Gull.

Hopefully when I get my pictures back they will help identify these birds better. 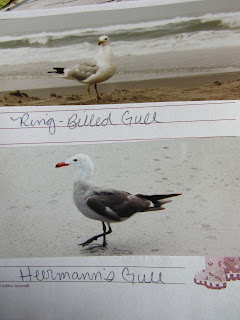 Posted by Rachelle Vaughn at 3:01 PM No comments: