The Ever Elusive Wood Duck

We are sure never disappointed after a trip to the refuges. We saw about six new species today. We heard a Common Loon, but didn't see one yet. Those and the Wood Ducks we have yet to see. Someday. 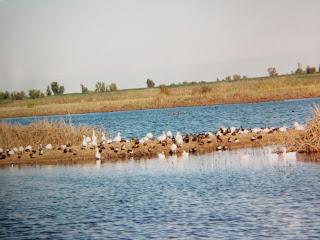 We saw a flock of pelicans, coots, egrets, shovelers, Great Blue Herons, and thousands of Snow and Ross's Geese. There were so many geese that the sky and water were filled with them. They're very noisy, too! We saw mallards, Connamon Teals and Wigeons. We saw five turkey vultures eating a carcass. They were ugly and frightening, especially when they started circling the truck! 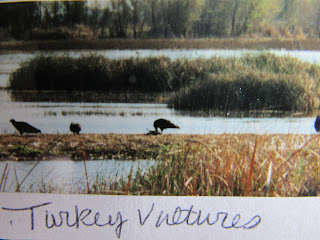 We saw two Common Moorhens for the first time. They look totally different walking than they do swimming, like chickens with roadrunner legs. 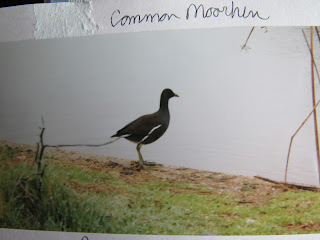 There were a few Buffleheads. They are very distinct, black and white and have huge white heads. We saw lots of Black-crowned Night Herons hiding in the bushes along the riverbank. They looked like juveniles because they were brown with stripes. There were at least twenty that we could see, poking out of the brush.

We saw lots of hawks flying overhead and perched in trees. They were probably Coopers, Swainsons, and definitely Red-tailed. I also saw a praying mantis. But it wasn't green, it was brown and looked like a stick.

Every time we go it's an adventure!!
Posted by Rachelle Vaughn at 3:39 PM